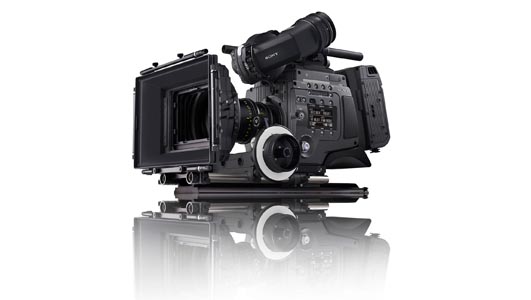 4K is just the beginning
The F65 exceeds the resolution of any previous digital motion picture camera (as of August 2011), the result of a remarkable Sony Super 35 image sensor.  Sony has been developing semiconductor image sensors since 1973 and manufacturing commercial quantities since 1985. Through all the decades, our design goal has always been to match the photographic quality of 35mm film. But now we’re setting our sights even higher: to surpass the limits of human vision. The F65 image sensor is the first of this new breed. 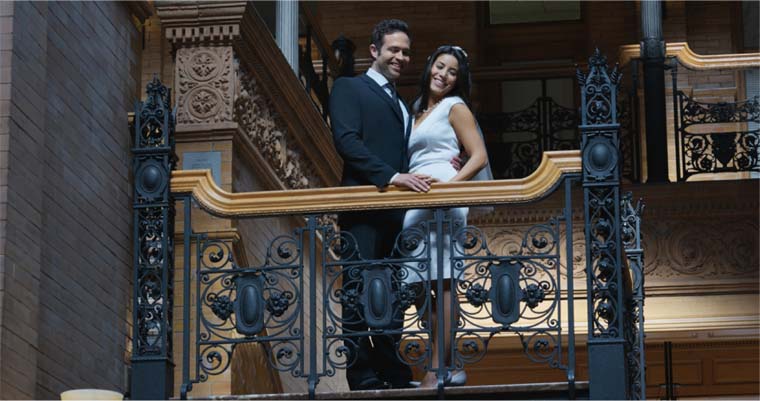 The sheer resolution of the F65 gratifies the eye in this still from “The Arrival,” directed and shot by Curtis Clark, ASC. (JPEG from an actual F65 frame.)

In its ability to resolve detail, to handle lighting extremes, to see into the darkness and still come up with a clear image, the F65 is blowing away veteran cinematographers and colorists. The Sony F65 is a stand-out in every one of these areas largely because the sensor incorporates technology that cannot be found anywhere else. 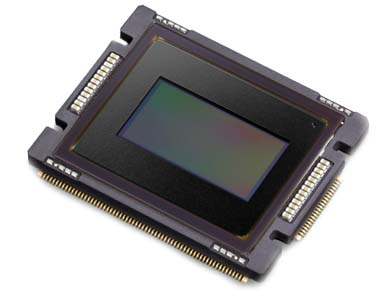 The F65 employs a unique Sony CMOS sensor which achieves higher resolution than any previous digital motion picture camera (as of August 2011) while delivering superb exposure latitude and sensitivity.

A study in superlatives, the F65 image sensor boasts the most photosites of any digital motion picture camera (20 million) and is the world’s first to offer a dedicated green photosite for every pixel in the 4K output image. The F65 can provide exquisite images of supersampling 1080p high definition, perfect for the time-is-money pressures of episodic television. The F65 can also output 16-bit linear RAW, which preserves all the information obtained from every photosite on the image sensor—up to 8K of resolution. This gives you phenomenal ability to demosaic, adjust grayscale, color correct, composite and even re-frame the image in post. The advantage here is ability to derive 4K, 2K, HD from 16-bit linear RAW.

Exquisite supersampling HD and 2K
Even if your postproduction workflow and deliverable are currently high definition or 2K, the 20 million photosites of the F65 deliver a powerful imaging advantage. The difference is “supersampling.” All cameras deliver high contrast on large image areas. But as the detail gets finer and finer, contrast suffers. We can draw up a chart of this loss with the vertical axis representing contrast from 0% to 100% and the horizontal axis representing picture definition, which can be measured either as line pairs per millimeter (LP/mm) in the optical domain or TV lines per Picture Height (TVL/ph) in video terms.

Conventional HD cameras start at near 100% contrast and begin to drop off as the picture details get progressively finer. Thanks to the new image sensor, the F65 contrast remains strong, even in fine details. So the picture is dramatically sharper.

20 million photosites versus “4K”
Some camera manufacturers measure their sensor resolution on the basis of “K,” a unit that equates to 1024 horizontal photosites. So a 4K sensor might have 4096 photosites on every row. Unfortunately, the actual resolution is less because these sensors use Bayer color filter arrays. This design leverages two facts. First, the human eye is more sensitive to black & white (luminance) detail than to color detail. Second, the largest component of luminance is Green. In the Bayer array, 50% of the photosites detect Green light only, 25% detect Blue only and the remaining 25% detect Red only.

The 4K Bayer array runs into challenges when you try to construct a ‘true’ 4K RGB output image from the compromised RGB Bayer components. This requires a de-Bayering process, an exercise in guesswork that must estimate two out of three color values for each pixel. For example, on a Red photosite, the de-Bayering algorithm must guess at Green and Blue values. However sophisticated the de-Bayering algorithms may be, they still cannot fully recreate image information that was never captured to begin with. For this reason, the final resolution falls, to various degrees, short of true 4K.

The de-Bayering process is an attempt to guess at data that was never present to begin with.  The result is something less than the full resolution promised by the simple count of image sensor photosites.

As a leader in image sensor technology, Sony was able to develop an original image sensor of substantially higher pixel density. Compared to the 8.8 million photosites of the typical 4K sensor, the F65 sensor has 20 million photosites.  Where the 4K sensor has half as many green photosites as there are 4K output pixels, the F65 sensor has a one-to-one ratio: one green photosite for each pixel of the 4K output image. This new “Zig-Zag” sampling structure results in best-in-class image sharpness, including full 4K resolution on the all-important Green channel. In this way, when an F65 RAW image is demosaicked to 4K, there’s absolutely no guesswork required in the Green channel, and twice as much precision for the Blue and Red. 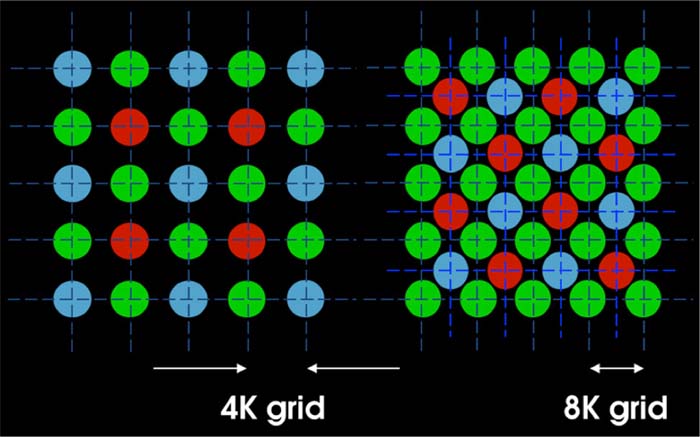 Compared to a conventional 4K sensor, Sony’s F65 has an 8K grid with twice the number of photosites. It’s a much finer sampling grid.

Exposure latitude and sensitivity
Conventionally, increased resolution comes at the sacrifice of other photographic qualities. But the F65 is no conventional camera. It takes advantage of Sony’s expertise in creating ever smaller photosites with ever  higher performance in sensitivity and signal-to-noise ratio. Thanks to Sony CMOS advances, the F65 empowers the cinematographer with prodigious exposure latitude, high sensitivity and extremely low noise. 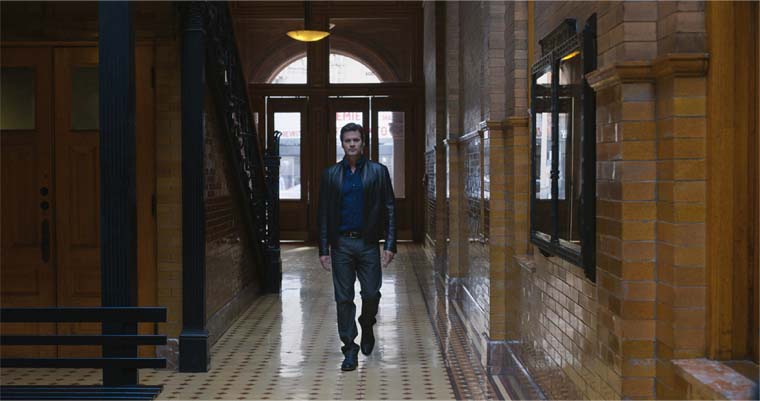 The F65 holds detail in the sunlit exterior, as well as the interior blacks in this still from “The Arrival,” directed and shot by Curtis Clark, ASC. (JPEG from an actual F65 frame.) 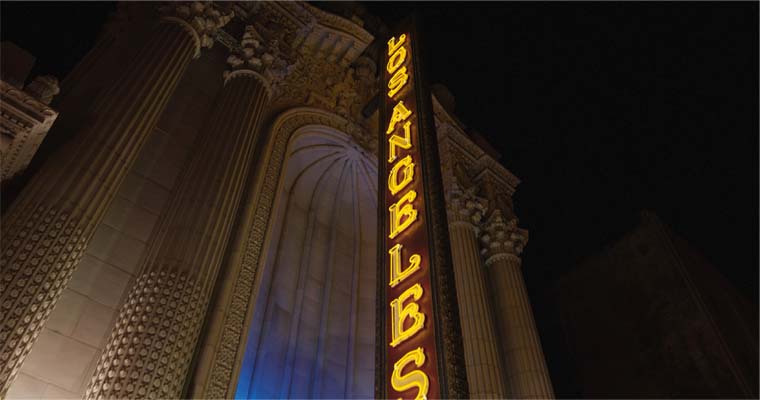 In another still from “The Arrival,” even dimly lit details are exceptionally clean. (JPEG from an actual F65 frame.)

Extended color gamut
In kindergarten, you probably wanted the biggest box of crayons. In digital cinematography, you definitely want it. Many HD cameras are limited to the Rec.709 color space. While this produces broadcast-legal color for television productions, it still falls short of motion picture film. The Sony F65 transcends this limitation.  The camera features a new Color Filter Array on the sensor, along with a 3D lookup table (LUT) and proprietary color management systems. In this way, the F65 can shoot in either Rec.709 or F65 Gamut, which actually exceeds the SMPTE specification for color negative film in every direction. 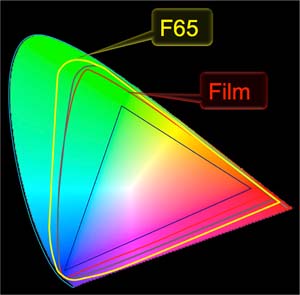 Here’s the bigger box of crayons you always wanted. The range of available colors in Sony’s F65 Gamut is larger than that of the SMPTE specification for color negative film.

Rotary shutter option
Typical CMOS sensor cameras are prone to “rolling” shutter defects, where the exposure timing of each row of pixels is slightly offset from the next. Row after row, these differences can trigger geometric distortion in moving objects or camera movements, particularly visible in the horizontal movement of objects with strong vertical lines. Rolling shutter artifacts are especially troublesome in 3D mirror rigs, where one camera is upside down. The artifacts in the left camera don’t match those in the right, causing unwanted disparities.  Rolling shutter also incurs “flash banding” where a strobe light illuminates only a horizontal band across the frame. As with other Sony cameras, the F65 uses an advanced CMOS design to reduce rolling shutter artifacts to a bare minimum. 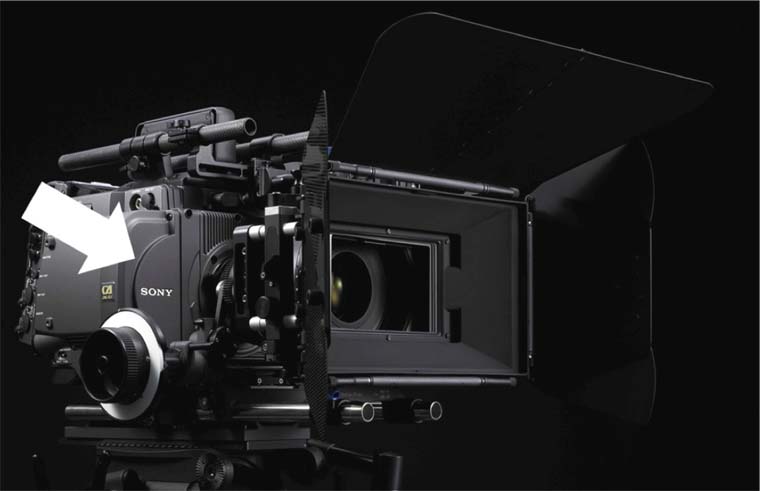 But for productions that demand complete geometric accuracy, the F65 can go further still. The Rotary   Shutter option eliminates rolling shutter artifacts. The Rotary Shutter takes the form of rotating blades and supports variable shutter angles (shutter speeds). With the Rotary Shutter option, the geometric integrity of on-screen objects is preserved. And flash banding is not an issue.

SRMASTER™ recording
While others design cameras, Sony designs comprehensive production systems that anticipate your needs from the set to postproduction, delivery and archiving. That’s why the F65 camera is designed to work with the docking SR-R4 SRMASTER field recorder, which captures your work to solid-state SRMemory cards. Here is file-based recording of phenomenal versatility, capacity and image quality. Best of all, the SR-R4 is just one part of a comprehensive, next-generation production system that includes field recorders, studio decks, a transfer station as well as the SRMemory cards.
The SRMASTER system represents a significant in advance in two distinct production styles: episodic TV and cinema.

•  Preserves the full quality of the original captured image, including the full resolution   of 20 million photosites
•  Flexible demosaicking “develops” the latent RAW image into RGB output files
•  Your choice of resolution: gloriously supersampled HD, supersampled 2K, true 4K or even 8K
•  Maximum image quality for vigorous color correction and grayscale enhancement
•  Incredible resolution for compositing at the very highest quality
•  Overhead resolution for punching in and motion stabilization in post
•  Flexibility to extract 4K, 2K, and HD quadrants from the full-resolution image